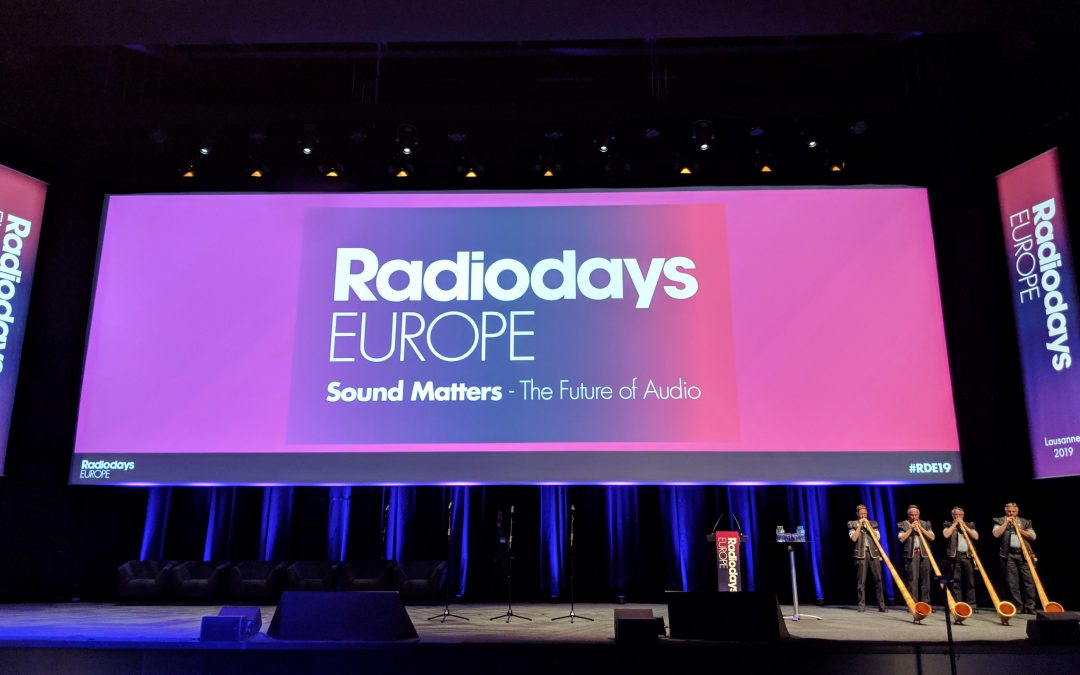 This year the fair focused on the following main aspects:
1. Smartspeakers
2. Interactivity
3. Radio over IP (streaming, podcast, smart speaker, display in car)
4. The distribution of multiplatform contents, measurement and analytics

For the first time digital world players as Google and TuneIn (the biggest digital radio aggregator platform in the world) are been protagonists. Also iHeartMedia (the biggest radio group in the world) was present with his president to tell how he is migrating his own business model on digital platforms.

Lausanne was the host city and look a nice location thanks to the efficient structures and for the event organization. 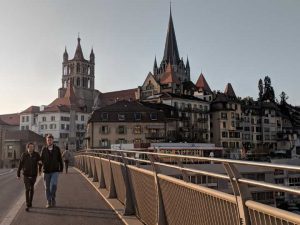 There has been a lot of talk about innovation and developments in the digital radio world, with the presentation of experimental projects by the most important European radio stations and more. Among these, we report:

Sybile Veil – CEO Radio France. He announced that they are developing a platform to allow access to content in flexible and on-demand mode with interactive features, focusing heavily on digital content distributed through various device (mobile, smart speaker, display in car).

Simon Goech – Chief Innovation Officer Swedish Radio. He confirmed the same line by emphasizing the risk for the radios if they do not modify their proposal for the digital users. 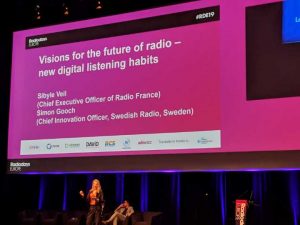 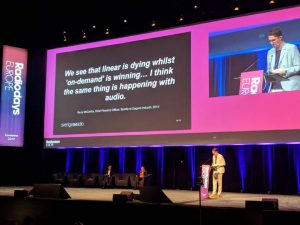 Also the speech by Floris Daelemans – Head of Research and Innovation of VRT (the Belgian public radio) was very interesting. He showed two projects carried out together with other radios and research centers: Marconi and HRadio to renew the radio product on the digital channel both in interactive then in hybrid listening.

Marconi project consists of integrating the radio with digital and social media to allow a more complete interaction between listeners and broadcast radio stars. 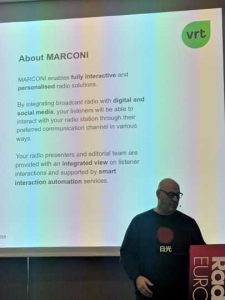 Goal of the project: increasing the engagement and the participatory interest of the listeners, in particular the more digital ones, thanks to contests, surveys, etc. At the same time, a lot of user information is collected about metadata, geolocation, sentiment analysis of messages and interests for the topics published by the radio. 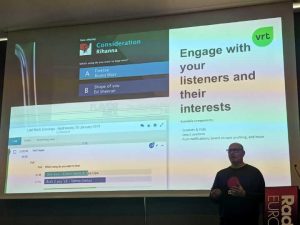 It also aims to collect news and information from various channels as well as distribute interactive content on different platforms and devices (mobile, smart speaker, display in car). 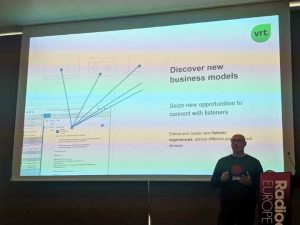 The international relevance of this project is proved by getting Horizon2020 funds, the most important European funding body for research and disruptive projects. 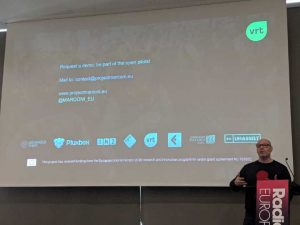 The project HRadio It focuses on how to use the audio content of which we bring some examples.

Imagine a user who listens to a podcast in the car, stops listening when he comes down from the car and picks it up at home on the smart speaker or from an app. 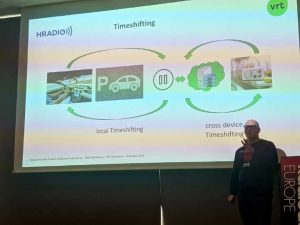 Second feature – listening to profiled content. Selection of the programs to listen to and to be recorded in my personal area. 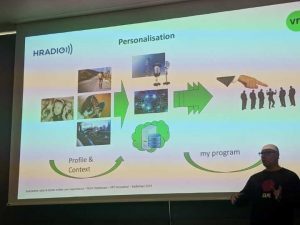 The over the top GOOGLE attended at Radio Days Europe for the first time.

It was not a speech so rich of news but proved that Google is very interested in the digital radio evolution. In particular, it highlighted the great opportunities to content access and to interact with the radio through the vocal interfaces that will revolutionize the domotics’ world with any device that supports Android and Google Assistant.

In any case, he wanted to convey his personal message to the radio world and the main points on which the radio of the future will be based: on demand listening, data driven functionality and interactivity. 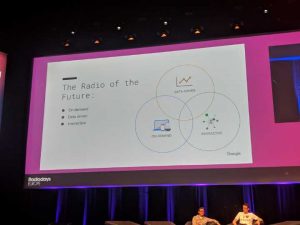 Another interesting session was showed by two German companies specializing in digital advertising sales. We are talking about RMS and Crossplan that have presented the scenario in the radio sector with their general manager.

They presented the big opportunity for the radio market to compete with the digital advertising leaders (the OTTs Facebook and Google) only if they approached the market with the right tools: user profiling with dedicated platforms to propose targeted advertising and analytic tools. 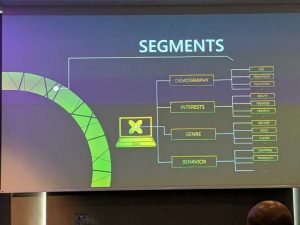 Moreover, profiled contents providing allows to better satisfy the user both for the editorial point of view then for purchases’ suggestions. 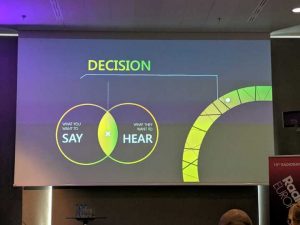 To date only 20% of the audio reach is addressable. This means that there is a wide scope of expansion toward other channels using data driven technology. 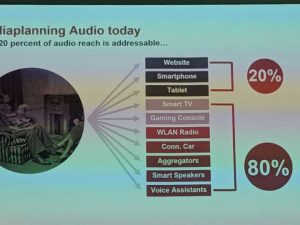 PRISA Radio, the largest radio group in the Hispanic language, has presented various digital initiatives in the digital channel, experimenting new formats and contests: an interactive radio show with games and quizzes with a sports brand. 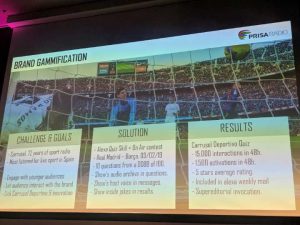 Live shows in stream without advertising or dynamically substituted with different spot for every country. 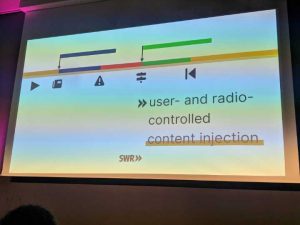 The main goal is to achieve more flexibility in radio listening thanks to vocal interface. 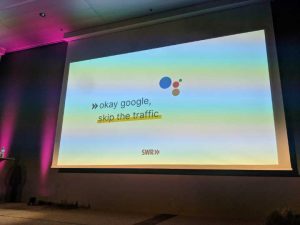 Podcast is another topic discussed in various speeches. In one of these, the Financial Times presented its solution about audio content over smart speakers. This fact highlights the pervasiveness and attractiveness of these new devices even between non-traditionally audio publishers like Financial Times. 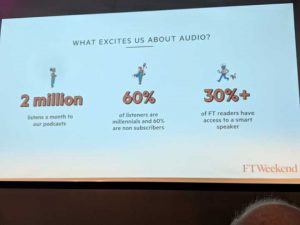 In conclusion, the future envisaged during the Radiodays of Lausanne can reserve great opportunities for the radio sector if it will be able to quickly exploit and adapt to new technologies, platforms and content distribution devices.

As suggested by Dave Coplin, The Envisioners’s CEO, and innovation expert, entrepreneurs should not miss out on the opportunities suggested by technology trends And the power of artificial intelligence to “make visible what is not today”. In other words, digitalizing all processes in a company or business means being able to analyze them more accurately and measurability. Also applies to the radio.

In other words, digitizing all the processes in a company or in your business means being able to analyze them with greater accuracy and measurability. This is true also for the radio.